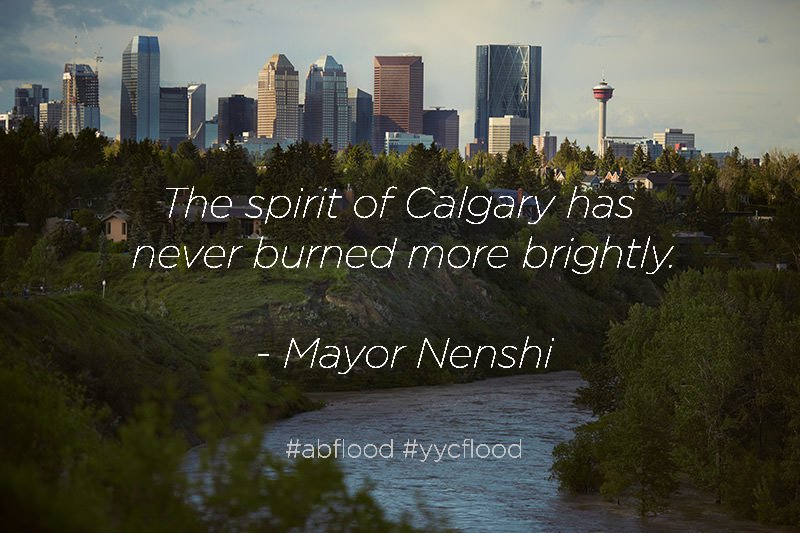 For the last three days, everyone here at Silly Booth and Photobolic sat riveted to our televisions watching the devastation of our homes and displacement of our communities. Our hearts were broken when we saw all the places that were familiar to us washed away. But we also saw how this amazing city came together to help each other and the civil workers working tirelessly to ensure our safety.

Our landscape might look a little different when the waters recede but our communities will emerge even stronger. We want to thank all the workers for their preparation and tireless dedication for without them, things may have turned out quite differently.

The following is an editorial piece from the Calgary Herald that just sums up what happened perfectly. (link)

“Take pride, southern Alberta. When disaster struck this week, you showed your mettle. You pulled together, and you did it in a quiet, efficient and orderly way. You did what you had to do because “git ‘er done” is your motto. Regrettably, the worst isn’t over yet, as more rain looms in the forecast, and the Bow has not yet crested.

Once in a great long while, a major flood comes along. But it’s part of life in Alberta, so you rise to meet the challenge with all the hardiness of spirit that is part of being an Albertan.

You know these things can happen when you choose to live at the confluence of a mighty river like the Bow and the feisty little Elbow, or near the Sheep River, or by a creek whose very name, Cougar, reflects the sneakiness of its namesake in its quickness to spring above its banks and unexpectedly pounce.

You don’t worry about it between times, you’re not anxious over every heavy June downpour, but you’re prepared, and when it happens, you deal with it. Just as you’re dealing with it now, even with the sad news of at least two deaths.

You’ll deal with it for as long as it takes, and then you’ll work hard to get back to the business of normal life. Resilience is a quality familiar to Albertans.

There’ll be plenty of time in the days ahead to reminisce about where everyone was, and what everyone did, during the flood of 2013. But for now, it’s about action, not talk. And there isn’t one person who isn’t playing a role in some way in battling the flood waters, whether it is in High River, Canmore, Calgary, or anywhere else. From sandbagging to helping a neighbour salvage their belongings, to co-operating with evacuation orders, to welcoming evacuees into private homes that are high and dry and out of danger’s way, to staffing emergency shelters, to following orders by police and the mayor to stay off the roads, to stay out of Calgary’s downtown and keep safe at home – every single person has helped.

It all adds up to one giant, collective effort, a well-oiled machine that slipped seamlessly into action with no hitches. Calgary’s deserted downtown sat quiet and empty as workers stayed home Friday or helped wherever they were needed with aid efforts. There was no major crime, there was no rioting. That sort of thing has happened elsewhere because disasters can bring out the worst in people. But that’s not southern Alberta’s way and never has been.

Prime Minister Stephen Harper’s father-in-law, Dennis Teskey, said it best Thursday. Manning a generator to help pump water out of his home and three others in High River, Teskey said: “You know, at times like this, everyone pulls together, everyone looks out for one another, and there’s a lot of care and love around.”

There is indeed. Lots of it. You are doing yourself proud, southern Alberta. Blue skies will be back soon.”